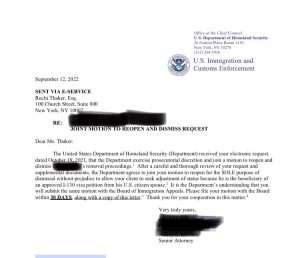 I was thrilled to receive this agreement from Department of Homeland Security last week, agreeing to join in my motion to reopen and dismiss my client’s old removal case!

This case has a LONG history!  Client came to the USA in 1993 as a conditional lawful permanent resident based on his marriage.  As soon as he came to this country, his marriage fell apart.  His I-751 petition to remove the conditions was denied.  He was placed in removal proceedings, where he fought the allegation that his marriage was not entered into in good faith.  While in removal proceedings, he married again, and his new wife filed a visa petition for him.  However, that marriage did not work out either, so adjustment of status was also not an option for my client.  While the immigration judge agreed that there was no marriage fraud in the first marriage, he still concluded that my client did not present enough evidence to show that his marriage was bona fide. So he terminated my client’s conditional lawful permanent resident status and gave him voluntary departure.

Years later, he married his third (and current) wife, in 2009.  In 2015, he and his wife consulted with me about his options.  I explained that the 10-year bar for failing to depart under voluntary departure had now expired, so if he were able to get his case reopened, he could seek adjustment of status based on their marriage.  I first requested and reviewed his immigration court and USCIS files (which were gigantic, as you can imagine based on the case history since 1993!), and we then strategized to ask the government to join in a motion to reopen his case to allow him to apply for a green card.

The first step was to get his wife’s visa petition filed.  This was also an uncertain time, as the Trump Administration was coming into office and we knew that policies were likely going to change, based on the views Trump held on immigration.  While we knew it was a risk filing the visa petition and having to go on an interview on it (since in New York, there is usually an interview on a visa petition based on marriage that occurs after the beneficiary was placed in removal proceedings, since there is an assumption that marriage is for an immigration benefit), my client and his wife remained optimistic that he would not be detained at the interview on the basis of his removal order (which can happen!).

We filed the visa petition.  It was pending for FOUR years.  We survived the Trump Administration!  In the summer of 2021, my client and his wife were called for an interview, and I went with them since they felt comfortable knowing I would be in the room with them.  The visa petition was approved the same day!

Once we had the visa petition approved, I prepared a joint motion to reopen to file with the Department of Homeland Security.  Working with my client, I presented all positive factors and equities my client had, including his lengthy marriage, his history of tax payments, his steady employment, no criminal history, a detailed history of his case, his life, etc.  The motion remained pending for almost a year, and on September 13, 2022, I received a letter from a DHS lawyer who reviewed my motion and the evidence submitted, agreeing to join in my motion to reopen and dismiss my client’s removal proceedings, so that he can pursue adjustment of status directly with USCIS.  Last week, I filed the joint motion with the Board of Immigration Appeals, and we are now waiting for the Board to act!  Once the Board acts to reopen and dismiss the removal proceedings, my client’s removal order will disappear and there will be nothing preventing him for filing the adjustment of status application with USCIS!

We all had tears of joy when we got this letter from DHS.  My client pursued his case for so many years, without success.  We then had to survive the strict policies during Trump Administration (for example, DHS was prevented from agreeing to join in motions to reopen, etc).  We then anxiously waited for the visa petition to be adjudicated, and finally, waited almost a year for a decision on the joint motion! But good things come to those who wait!

I am so happy for my client and his wife and we will soon be filing his adjustment of status application with USCIS! I hope to see him become a green card holder within the next few years!