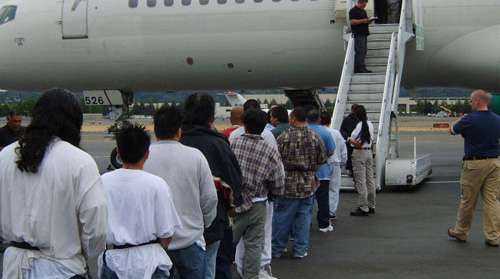 NOTE:If you are not a United States citizen, it is wise to consult experienced criminal immigration attorneys BEFORE pleading guilty or accepting any plea agreements! What you plea guilty to will determine whether the U.S. Immigration and Customs Enforcement will begin removal proceedings against you and whether you will be eligible for any relief from being deported. Please feel free to contact me immediately if you or someone you know and love is about to plea guilty to any criminal offense anywhere in the United States!

Deportation from the United States is the harshest punishment you could suffer for violating United States immigration laws and criminal laws. Many non-citizens all-too-often do not realize that even a minor infraction or a conviction, even if it occurred decades ago, could trigger deportation or removal proceedings. In many cases, you stand to suffer harsher immigration consequences than criminal consequences for a conviction. For example, if you had a conviction for which you received probation, if placed in removal proceedings on the basis of that conviction, you could be subject to indefinite mandatory detention in immigration custody far away from your home and family, and may ultimately be ineligible for a waiver of deportation, even if you have been a green card holder for decades and decades.

Relief from Deportation or Removal

Detention Based on Deportation Issues

Section 236(c) of the Immigration and Nationality Act lists broad categories of noncitizens who are subject to mandatory detention based on their removability under specific criminal and security related provisions, including, among others, INA § 212(a)(2) and INA § 237(a)(2)(A)(ii), (A)(iii), and (B), (C), and (D). On April 29, 2003, the Supreme Court issued a 5-4 decision in Demore v. Kim, 123 S. Ct. 1708 (2003). The Court held that under INA § 236(c), the government may detain classes of lawful permanent residents without conducting individualized bond hearings to determine whether they pose a flight risk or danger to the community.

Only individuals who were released from criminal custody (meaning physical custody) after October 8, 1998 are subject to mandatory detention. Under the Board of Immigration Appeals decision Matter of West, 22 I. & N. Dec. 1405 (BIA 2000), this includes individuals who are released from physical custody following a criminal arrest, regardless of whether the person is sentenced to incarceration.

Individuals subject to mandatory detention will not be released on a bond pending their removal case, and they will have to fight their deportation case while remaining detained. This, of course, is a very difficult situation for both the detained individual and his or her family members.

However, whether an individual is even subject to mandatory detention is an ongoing issue of great importance and debate. If you are concerned about whether you or someone you know and love would be subject to mandatory detention if detained by the U.S. Immigration and Customs Enforcement, please contact our immigration attorney in New York for a consultation to discuss your situation in detail.

Will I be deported?

While there are many crimes that could form the basis for deportation, the most common are:

If you have ever been convicted of any of the crimes listed above-or any other crime-it is in your best interest to speak with a criminal immigration attorney. While you may believe your conviction was “just a violation” or “just a misdemeanor,” it may still affect your immigration status and your ability to work and stay.

How can I Stop Deportation?

How Do I Win My Deportation Case?

Just because you may be eligible to apply for deportation relief does not guarantee that you will win. Be wary of anyone who says he or she can “guarantee” that you will win. An immigration judge has to consider many things before deciding whether you deserve to stay in this county.

Most common factors the immigration judges look at in considering various deportation waiver applications and in deciding whether you deserve to stay here include, but are not limited to:

Tip: You should always pay taxes regardless of whether you are here legally or not. If you do not have a social security number and cannot obtain one, you must obtain and use an IRS Individual Taxpayer Identification Number (TIN). Click here to learn how to obtain a tax identification number so you can pay your taxes!)

Upon “looking into your life” and going through all the evidence and testimony you and the government lawyer submit, the immigration just is required to weigh and balance all of your negative factors and positive equities. If the good outweighs the bad, it is very likely that an immigration judge would grant you a waiver of deportation so that you can stay in the United States. However, if the immigration judge finds that the negative factors in your case, mostly, the nature and extent of any criminal history, outweigh all of your positive equities, you are likely to lose your case in immigration court.

And remember, even if you win, the U.S. Immigration and Customs Enforcement can appeal the immigration judge’s decision to the Board of Immigration Appeals, just like you can appeal if you lose. It is very rare that a deportation or removal case simply ends in immigration court with outright victory. Majority of the times, cases wind up on appeal, then go through motions, and a significant amount wind up in federal court litigation.

There is rarely a case that is so clear cut “winnable” or “hopeless.” It is always in your best interest to find competent legal representation, so that your case can be properly presented. Many times, cases are lost because of poor submission of documentary evidence to support a deportation relief application.

If you wish to consult an immigration attorney about your case in immigration court, at the Board of Immigration Appeals, or in federal court, please contact Ruchi Thaker, an experienced immigration lawyer in New York, to schedule a consultation.