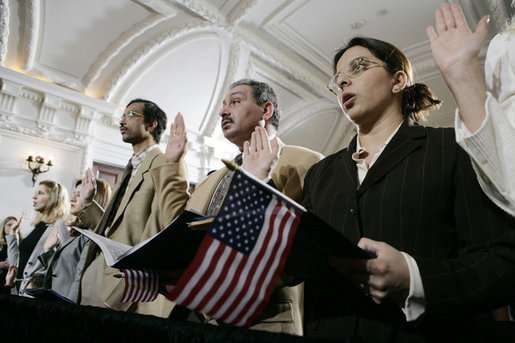 NOTE: If you are not a United States citizen and have a criminal conviction, applying for citizenship may be risky! Not only may you be barred (in some cases, permanently) from becoming a naturalized citizen, but you may also trigger removal proceedings as a result of your conviction, even if you obtained your lawful permanent residency without any problems and your conviction was a long time ago! If you have ANY criminal history (a violation, a misdemeanor, a felony, etc.), it is very important that you consult with an experienced immigration attorney before filing your naturalization application with the USCIS, so that you are made aware of any potential risks and problems in advance. This may be the most important conversation you have with an immigration lawyer!

Before applying for naturalization, consider these questions:

Does your criminal conviction make you removable from the United States?

You cannot always tell if your conviction fits a category of removable offense(s) just by looking at the name of your offense, so it is very important that you consult with an experienced immigration lawyer about your entire criminal history. Convictions for the following offenses may trigger a removal case against you.

If you have been convicted of an aggravated felony, you will have very little likelihood of fighting removal, especially if your conviction took place after April 24, 1996.

These offenses are harder to define, but include most offenses that require an intent to steal or defraud, certain assault offenses, and most sex offenses.

You are deportable for a CIMT if you:

(1) committed the CIMT within the first five years after your admission (in any status) to the United States, and this is an offense for which a sentence of one year or more could have been imposed (even if your actual sentence included no jail time); OR

(2) committed two CIMTs not arising out of a single scheme (event) at any time after your admission to the United States, regardless of the potential or actual sentence imposed.

Keep in mind that merely because a conviction may make your removable, it does NOT necessarily mean that it is a bar to your naturalization!

If you believe that you have committed an offense that could be an aggravated felony or a CIMT that may affect your ability to naturalize, call me today to see whether your criminal history makes you ineligible for naturalization!

Does your conviction make you ineligible to become a naturalized U.S. citizen?

To naturalize, you must meet certain basic requirements, which are outlined here:

No person shall be naturalized unless he or she:

The following aliens are permanently barred from naturalization:

The following aliens are temporarily barred from naturalization:

You also cannot show good moral character if during the 5-year (or 3-year) statutory period you:

TIP: The USCIS is prohibited from looking into your past, especially criminal past, beyond the statutory period, UNLESS there is something during the statutory period that triggers an inquiry beyond that time. In many cases, regardless of how old a conviction, the USCIS continues to deny citizenship for lack of good moral character. This finding by the USCIS can often be challenged successfully in federal court.

U.S. Citizenship Can be Acquired by Operation of Law or by Naturalization

By operation of law, a person becomes a citizen either by birth in the United States or by birth abroad to U.S. citizens parents or nationals.

There is also derivative citizenship for certain aliens, whose parent or parents naturalize, for whom citizenship is automatically conferred as a matter of law. If you believe you derived citizenship from either or both of your parents, you should file Form N-600.

Issues regarding derivation and acquisition of citizenship become especially important if you have no other form of relief from deportation, for example, if you are a long-time green card holder with an “aggravated felony” conviction or another serious criminal conviction. Often times, it is worthwhile to investigate whether you acquired citizenship at birth or derived citizenship through the naturalization of one or both of your parents. This, however, is complex and you should consult an immigration attorney to determine whether you acquired or derived citizenship. In certain situations, this may be your only hope against being deported.

Generally, certain lawful permanent residents married to a U.S. citizen may file for naturalization after residing continuously in the United States for three years if immediately preceding the filing of the application:

There are several ways foreign-born children of U.S. citizens may obtain evidence of citizenship:

Generally, U.S. citizen parents of children born abroad may file Form N-600, Application for Certificate of Citizenship. This form should be completed in accordance with the instructions provided and should be accompanied by 2 photographs of the child, copies of any documents that verify eligibility, and the required filing fee to be considered complete and ready to process.

Important note: Children born abroad of U.S. citizen parents derive citizenship from their parents. The Certificate of Citizenship is merely a record of citizenship – it does not confer citizenship on an applicant.

Naturalization Based upon Military Service

Recent changes in the relevant sections of the INA (Sections 328 and 329) make it easier for qualified military personnel to become U.S. citizens if they choose to file a naturalization application.

U.S. Citizenship and Immigration Services (USCIS) has created a streamlined process specifically for military personnel serving in active-duty status or who have recently been discharged.

Click here to visit the USCIS’ page on eligibility requirements and the process to apply for naturalization based upon military service.

Read the latest USCIS Fact Sheet on Naturalization Process for the Military.

If you have served for three years in the U.S. military and if you are a a lawful permanent resident, you are excused from any specific period of required residence, period of residence in any specific place, or physical presence within the United States if an application for naturalization is filed while the applicant is still serving or within six months of an honorable discharge.

To be eligible for these exemptions, you must:

If you file for naturalization more than six months after termination of three years of service in the U.S. military, you may count any periods of honorable service as residence and physical presence in the United States.

If you file for naturalization more than six months after termination of three years of service in the U.S. military, you may count any periods of honorable service as residence and physical presence in the United States.

This is the only section of the Immigration and Naturalization Act that allows persons who have not been lawfully admitted for permanent residence (non green card holders) to file their own application for naturalization.

An applicant who has served honorably during any of the following periods of conflict is entitled to certain considerations:

Applicants who have served honorably during any of the aforementioned conflicts may apply for naturalization based on military service and no period of residence or specified period of physical presence within the United States or any State is required.

Do you think you are ready to become a U.S. citizen?

Contact me if you wish to consult with me about your eligibility for naturalization, or if you or your loved one needs assistance in becoming a citizen.