Imagine this….you came to the United States as a lawful permanent resident (LPR) when you were only three years old. You are now almost 40 years. All of your relatives are in the United States. Somewhere in your late teens and early 20’s, you spent time with some bad kids and got into trouble. You also did not think it was important to become a naturalized citizen when all of your family members became citizens. But, for the last 15 years, you’ve led a good life – worked, got married, and had a child. But as a non-citizen, your past comes back to haunt you, and upon returning from a trip abroad, you find yourself locked up by the U.S. immigration officials for a 15-year-old conviction you thought would no longer matter. Immigration authorities take away your green card and passport, and throw you in immigration detention. Your family is left frantic, trying to make sense of everything, and everyone feels lost and worried.

This is exactly what happened to my client, who was detained by Immigration and Customs Enforcement in November of 2016 when returning from visiting his wife and child, who currently live abroad. In every sense, my client is an American. He speaks fluent English. This is the only country he knows as his home. He has never gone back to his family’s native country since he came to the United States when he was three years old. His entire family lives in the United States (with the exception of his wife and son). Yet, he now faced banishment from the only country he knows as home, because of a few mistakes he made when he was a young man.

When his family members came to discuss his case with me, I reviewed my client’s criminal history and immediately saw that my client would be eligible for cancellation of removal for permanent residents. He had total of four arrests, but only one conviction that had any immigration consequences attached. His one 15-year-old conviction made him “inadmissible” to the United States, which is why he was not legally admitted back as a returning lawful permanent resident following his trip abroad (even though he traveled previously without a problem – this is the risk any LPR who has a criminal history takes when traveling after a conviction). After explaining the law to my client’s family and reassuring them that their beloved family member would get a chance to ask an immigration judge to allow him to keep his greencard, we focused on a more immediate concern: was there a way to get my client out of immigration detention while the U.S. government started the removal process.

As an inadmissible LPR, my client was subject to “mandatory” detention under immigration laws as an “arriving alien.” Under this classification of an “arriving alien,” an immigration judge would not have the legal authority to decide whether my client should be released from detention upon posting of a reasonable bond, or under any other conditions. As such, we could not ask an immigration judge to decide whether my client should be released while he prepared to fight his case in court. Therefore, I prepared and filed and an extensive “parole” request directly with ICE, asking ICE to consider releasing my client pending his court case. I filed the request before the Thanksgiving holiday, hoping that ICE would act favorably and release my client, after seeing that keeping him detained would not be good way to spend government resources.

However, we did not get any answer on the parole request by Thanksgiving.

In the meantime, my client was scheduled for his first immigration court hearing for earlier this week. I was prepared to hand in the cancellation of removal application and take a date for his “trial” (often referred to as an “individual” or “merits” hearing in immigration court). As soon as I handed in the application, the judge remarked that he was surprised that ICE decided to detain my client for two months on the basis of a very old conviction. Judge was visibly irritated with how ICE was using its resources and time. The judge asked me if I could do the merits hearing the same afternoon! To me, that was a positive thing, since the judge would not have asked my client to submit any documentary evidence in support of his case, signaling that the judge would act favorably and grant my client’s request for cancellation of removal. However, as a lawyer, I have to anticipate what might have happened had I agreed to do the merits hearing the same day: if the judge granted my client’s application for relief, the ICE lawyer could have appealed the favorable decision. That meant two things: (1) my client would remain detained pending an appeal by ICE; and (2) there would not have been documentary evidence showing on what the judge relied in granting relief to my client, so it would be difficult to defend the judge’s favorable decision on appeal.

I briefly discussed with my client and asked the ICE lawyer whether he would agree to accept the judge’s decision as a final decision (without an appeal) if the judge granted my client the relief he sought. He could not agree. Therefore, I decided it was in my client’s best interest to present some documents showing that he deserved favorable exercise of discretion, in case there would be an appeal by ICE. Judge did not really want documents, be allowed me the time. He gave me two days. I was thrilled. Having an initial hearing and a merits hearing in the same week is practically unheard of! Since I had already submitted favorable documents in support of the parole request, two days was plenty of time to assemble a supporting documents package to provide the judge and the ICE lawyer. I immediately accepted the trial date for January 12, 2017.

I was able to prepare my client for his testimony through Internet attorney visit (a really wonderful tool the detention center had, which saved me several hours of driving to see my client), and my client was very eager for his day in court.

On the morning of January 12, 2017, my client, wearing a bright orange jumpsuit, in handcuffs, and with shackles on his feet, appeared in immigration court, with his family behind him to support him through the process. My client was truthful about his criminal history, showed rehabilitation, and demonstrated genuine remorse for his actions as a young man. When the ICE lawyer questioned him about some deficiencies in his case, my client was upfront and honest about it. As such, there was only so much the ICE lawyer was able to ask my client. The judge recognized that my client was a good person. He said so. He offered my client guidance about the opportunities he has in this country that so many people never get to have (for example, the people whose deportations the judge orders regularly). He then granted my client cancellation of removal, and wished my client the very best in his future. My client was humble and apologized to the judge, the ICE lawyer, and to his own family for his past behavior.

The ICE lawyer accepted the judge’s decision as final and waived appeal.

I waited with my client’s family for over two hours after the hearing, while ICE processed him to be released from detention. The wait was worth it (and much longer than the actual court hearing). When my client walked out with his own clothes (and his green card), no handcuffs, no shackles, and took his first breath of fresh, crisp, January air as we walked out of the courthouse, there were smiles on everyone’s faces.

Don’t take my word for it, though….A picture is worth a thousand words! 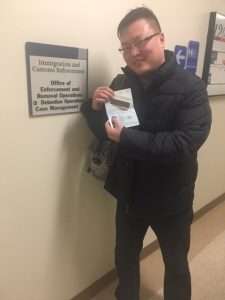 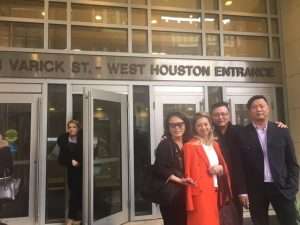