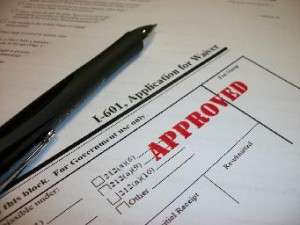 Today, I won a very difficult adjustment of status case (I-485) that required an inadmissibilty waiver (I-601).

My client came to the USA through Miami in 2003 from Guyana, using a fake passport, and he was immediately detained at the airport and was placed in asylum-only proceedings.  He was eventually released and moved to New York.  He was supposed to go to immigration court for his asylum-only proceedings, but he never went and as a result, he was ordered deported in his absence.

A few years later, he was detained by ICE and eventually released on an order of supervision, whereby he was required to check-in with ICE every few months. He then married a US citizen, built a life with her and the couple had a son. However, during this time, my client was also arrested several time an although most of the cases were dismissed, he was convicted of a crime involving moral turpitude.  This fact only further complicated his case when he decided he needed to do something to fix his immigration case for the safe of his wife and son.  The couple had started a successful business together and my client’s remaining in the United States was critical to their business and financial survival.  My client first applied for a green card through marriage with another lawyer.  The couple went to an interview for the USCIS to decide whether their marriage was bona fide, and the couple passed the interview.  But, in addition to the green card application, my client needed to seek a waiver of inadmissibility due to the fraud he committed by using the fake passport to attempt to enter the country (his criminal conviction fell within the petty offense exception, so he did not need to seek a waiver for that).

His former lawyer filed the waiver application with the adjustment of status application.  The waiver application requires a showing of “extreme hardship” to a United States citizen of permanent resident relative, which in the case of document fraud can only be a “parent or spouse.”  Children do not count for a waiver based on document fraud.  According to my client, no hardship evidence was submitted with the waiver application.  So he retained me and we worked on putting together a great hardship evidence package, showing both emotional and financial hardship to my client’s United States citizen wife in the event my client’s waiver was not granted.  Putting together the evidence package takes a lot of work, especially when there are aggravating factors, such as fraud or a criminal conviction.  The more the aggravating factors, the higher the amount of hardships one must show to overcome the negative factors.  Sometimes, the aggravating factors can be so serious that there would be no amount of hardships one can show to get a waiver approved.  This is why working with an immigration lawyer is critical in preparing the waiver package.

We worked closely and prepared the waiver package documents and submitted them.  The package of documents was over 300 pages of QUALITY evidence (remember, the quality is important, not the quantity!).  In less than 24 hours, the USCIS denied the waiver, without ever conducting an adjustment of status interview.  In denying the waiver, USCIS agreed that my client’s wife would suffer hardships if she were to relocate to Guyana in case my client was deported.  However, they did not find that she would suffer any hardships in the United States, if she were to remain here.  Because the waiver was denied, the green card application was also denied.

Naturally, we were all stunned at the denial.  My client was upset.  But he trusted my judgment.  Instead of filing a motion to reconsider or to reopen the adjustment application and an appeal of the waiver denial, I advised my client to re-file the entire adjustment of status application with a new waiver package, addressing the concerns USCIS had in its denial.  My client was very patient and understood why it was a better option to re-file the case, after I fully explained what we should do in the new case.  I also wanted the benefit of taking my clients to an adjustment of status interview, something they never had when the first application was denied (they had only gone to a “marriage fraud” interview to determine the bona fides of their marriage, not an adjustment of status interview with the waiver consideration).

We worked closely together and prepared a new case with the waiver package.

Last week, the client had his interview.  I went with him and his wife, just so they would feel more comfortable at the interview.  The interviewing officer had a lot of tough questions for my client and his wife about her hardships.  My clients were honest and forthcoming.  My client accepted responsibility for his errors in the past (the fraud and the conviction) and showed genuine remorse.  At one point in the interview, I even noticed the officer getting a little teary-eyed from the emotional plea made by client as to why he should be allowed to remain in the United States.

Less than 24 hours after the interview, the waiver was approved and my client is now waiting for his green card to arrive in the mail!

This was a tough case for me, because I did not expect the first waiver package to be denied.  The problem seemed to be that no one at USCIS read everything that was submitted, since they denied the waiver in less than 24 hours after over 300 pages of quality evidence was submitted.  They simply did not see the hardships.  The second time around, the USCIS conducted an interview, where the officer had a chance to see my client and his wife together and truly see how much hardships my client’s wife would have (she takes care of her mentally ill brother, the client’s son has learning disabilities, etc.)

I am so happy that my client’s nightmare of over 12 years has finally come to an end (after 3  years as my client)!