Today, on a rainy, windy, unseasonably cold day in May, I won a cancellation of removal case at the New York immigration court. I actually want to credit my client for winning the case! It was his honesty, remorse, rehabilitation, and taking responsibility for his actions that won the case. So really, it was HE who won his case. I merely helped on the way.

My client, a long-time green card holder (lawful permanent resident), was arrested four times, with the first arrest being when he was 18 years old, and the last arrest when he was in his mid-20s. He spent time with the wrong friends, like many young adults do. Getting into trouble was the way he expressed his desire to have more freedom as a teenager, when he felt the burden of helping his single mother raise his siblings. Growing up without a male role model in his life, my client found comfort with his friends, who led him down the wrong path. In fact, his mother even punished him by sending him back to his country, Dominican Republic, for six months, just to help him get away from the negative influence of the company he was keeping. But upon his return to the United States, my client did not change his ways. He grew more rebellious, which started the downward spiral of his getting arrested several times for serious offenses. Offenses serious enough that he could have lost his legal status in the United States, been deported to Dominican Republic with a very difficult path to ever return to the United States, and been separated from the many family members he has in the United States.

Eventually, my client realized that getting arrested was not going to help him, if he was serious about having a life in the United States. That included having a good job and eventually having his own family. He turned his life around. He maintained steady employment, paid his taxes, assumed more responsibility to help his family members financially, and recently, he also became a first-time father!

Department of Homeland Security started a removal case against my client in 2013, when he returned from a short trip abroad and was found inadmissible to the United States as a result of one conviction he had in 2010. He was required to go in front of an immigration judge to see if he would be allowed to keep his lawful permanent resident status in the United States.

When he came to see me about his case, I informed him he was eligible to seek cancellation of removal for permanent residents in front of the judge.  I told him it would not be easy to win, because cancellation of removal cases never are easy! He understood that he was going to have to work hard to put together a strong case. Over the next few years, we worked closely together to discuss how we could best present his life, while having to deal with the fact that he was arrested four times for serious criminal offenses. From the beginning, my client fully accepted responsibility for his behavior. He had no one to blame but himself. We carefully prepared supporting documents with the help of his family, friends, and employers. Then we waited. A long time. For today.

At this “trial” in immigration court today, my client testified truthfully about why he was arrested. No one interrupted him while he was speaking from his heart. Ten family members also listened in carefully as he accepted responsibility for his mistakes and asked for forgiveness. In fact, he testified so strongly, that other witness’ testimony was waived by the Department of Homeland Security lawyer, as she felt that it was not necessary to hear the witness’ story after having heard my client’s story directly from him.

At the conclusion of the trial, the immigration judge granted my client’s application for cancellation of removal, with no objection from the DHS attorney. As the DHS attorney handed my client’s green card back to me, she noted that she was extremely impressed with my client, and how he accepted responsibility for his behavior and turned his life around. I agreed!

Here he is, reunited with his alien registration card! He will soon apply for citizenship!  Photograph published with the client’s knowledge and consent. 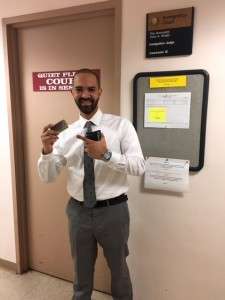