My client was a Turkish citizen. He filed the asylum application on his own a few years ago, not realizing the importance of having a lawyer by his side. The application was initially rejected by USCIS and he took a long time to send it back. He also tried to update his address with the asylum office, but something went wrong and he never got a notice for his asylum interview and missed his interview. So he was referred to the immigration court.

The worst part of this was that because he didn’t go to his asylum interview, the “clock” stopped on his ability to seek a work permit. He was never able to obtain a work permit, a Social Security card, or a driver’s license. This is a harsh consequence of the asylum “clock,” which punishes the applicant for and delays or missing an interview.

Once he was placed in removal proceedings and had to go to court, he realized he could not handle the situation on his own anymore, and he came to see me. We discussed his case in detail. But he was having a hard time explaining certain events about his life in Turkey. Plus, his case was complicated by the fact that he had a foreign criminal conviction, which I knew was going to be an issue for the judge and the DHS lawyer. I told him we would work together to provide a detailed statement to the judge in support of his asylum application, because while he listed on his application that he only had one basis to seek asylum, after our conversation, I discovered that there were several reasons why he feared returning to Turkey.

As we got closer to his trial date, he and I worked closely on his personal statement, which is usually the most important part of any asylum case. I helped him put his thoughts in order, and showed him where he was being repetitive and why that was not helpful. The result was a very good 17-page statement that my client worked hard to draft, even with limited resources like a proper computer!

I spent many hours preparing my client to testify in court, so that he could properly tell his story. It was important for him to talk about his criminal conviction abroad, because certain convictions that might be “particularly serious crime” or a “serious nonpolitical crime” may bar an applicant from getting asylum. We had to convince the judge that his conviction was not a bar to my client getting asylum.

On the day of the hearing, my client did an amazing job in court, answering all questions truthfully, frankly, and openly talking about extremely difficult things. Both the judge and the DHS lawyer patiently listened to my client’s story without interrupting. DHS lawyer aggressively questioned my client about his criminal conviction, but I informed the judge that my research had indicated that his conviction would not be a disqualifying one for asylum. I also had case law to support my position. The judge agreed.

My client was granted asylum in the United States by the immigration judge. The DHS did not want to appeal, and accepted the judge’s order as final. My client’s immigration journey is not yet over, but for now, he can rest easy, knowing he will not be sent back to a country where he truly feared for his life for multiple reasons.  My client also gave me lovely flowers as a “thank you” gift! 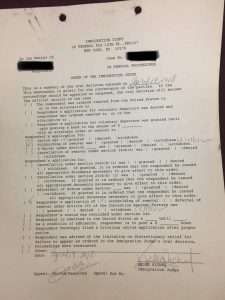 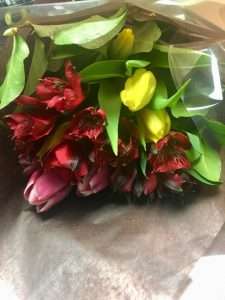