Today, an immigration judge in New York granted my client cancellation of removal for permanent residents.  My client had an old criminal conviction for drug possession.  He has been a lawful permanent resident (LPR) since 1981!  In 2013, he traveled abroad, and when he returned, he was found inadmissible to the United States as a returning LPR and Department of Homeland Security started removal proceedings against him, charging him with inadmissibility for a conviction for a crime involving moral turpitude and for violating controlled substances laws of the United States.  I worked closely with my client to put his entire criminal history together (there were several other arrests, all of which were dismissed), draft a detailed life story, explaining why he got into trouble when he was younger and how he has changed, and worked with his family to obtain helpful letters and other evidence showing that my client was a great son, husband, father, and brother!  Client testified truthfully about his past and with his family looking on, judge told him that he felt that my client deserved a second (and final) chance to keep his green card and remain with his family.  Everyone happy and crying!  This is what I love the most about my work…seeing the smiling faces at the end of an immigration court hearing! (Photo posted with client permission) 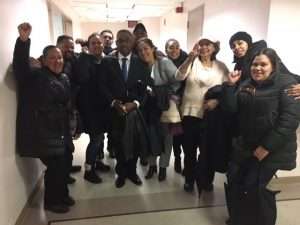